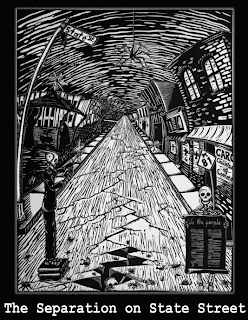 Does your grandmother run a dungeon? Independent film maker Rob St. Marry joins us in the studio to discuss his new documentary The Separation on State Street. His film follows the story of Anonka owner of a new age gift shop and "Witch Museum" in a small conservative Michigan town. Anonka's shop met with protests and boycotts from the beginning. But "all hell broke loose" when she challenged the cities decision to have a nativity scene placed on the court lawn. Soon afterwards Anonka and her family had to endure violence, death threats and intimidation at the hands of their "Christian" neighbors. Rob St. Marry shares the fascinating story, much of which he was personally an eye-witness to.

Click here for sources/relevant articles to this episode. All episodes are available for download at no cost. Simply subscribe to our podcast using itunes or a similar podcast client using the feed links above. You can also listen to the episode here by using the player above or you can download the episode by right-clicking this link and selecting "save link as...".
Posted by Jeremy

Oops - "save as" link points to episode 4. - John, your neighbor

More tragedy! OHNOEZ! ;)
The feed has the same description as the previous episode and the file is only 1.9MB. :(

errr... or sort of not... it looks like the feedburner feed has two entries for episode 5. The second entry has the truncated file.

Sorry, we use a free service and its been very temperamental lately. I guess you get what you pay for. Ill see what I can do to fix this.