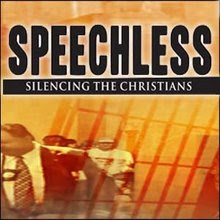 According to the American Family Association's new documentary Speechless: Silencing The Christians, homosexual activists are using sophisticated propaganda techniques to manipulate the public into accepting the homosexual lifestyle as normal and harmless. As a result Christians are now being stereotyped by the media as being intolerant bigots clearing the way for persecution at the hands of homosexual activists who use hate speech laws to silence Christian's free speech rights and suppress their freedom of religion. For this episode the doubtcasters set the record straight by exposing the exaggerated claims, cherry-picked evidence and anti-gay pseudoscience in the film speechless.

To download this or any previous Reasonable Doubts episodes click here. Find the episode you want and right click the "play now" link and select "save target as..."
Posted by Jeremy

Thank you for taking on the AFA rubbish and exposing the myths and deceptions they used in their propaganda film. They expect criticism from gay liberals like me, but they don't expect to have their pseudo-science and religious nonsense exposed by those who actually know what they're talking about. Ultimately, I think the sort of analysis and critique you did is more useful than political analysis alone precisely because it undermines their starting point—relgion. Great stuff. Thank you!

"[H]omosexual activists are using sophisticated propaganda techniques to manipulate the public into accepting the homosexual lifestyle as normal and harmless."

Flip-flop the words "homosexual" and "Christian" in that sentence, and see how it sounds.

One additional contribution you could make to overcoming gay stereotypes is by not mimicking them by speaking with a lisp or effeminate tone of voice, as one of you did several times in the podcast. They don't all talk that way.

your righteousness has been noted

So, Jeremy, let me get this straight - you think that chiding you for using mocking stereotypes is somehow "rightoeusness"? In your classes you teach, are you getting laughs with your "effeminate tones of voice"? Do you do Sambo dialect also?
mjosef

I have to admit I was kind of uneasy about the voice too.

I think because we were making making fun of the tactics that these Christian groups use (taking things out of context, stereotyping etc.) it is acceptable as an act of parody -- not of homosexuals, but of their enemies and their propaganda.

Still, were we to do it over again, I'm not sure we would have included that. But that's just my feeling on the matter.

I am sorry if anyone was offended that was not our intention.

All three of us are big proponents of equal rights and activists for the "big gay agenda."

Thanks for making me aware of this. I am speechless that this sort of thing gets any legs whatsoever. I am encouraged that TV stations display good sense in keeping this off mass mediums. While I am not a fan of censorship, and strongly advocate freedom of speech, I am against thinly veiled propaganda against social groups, especially when it is dressed up as an attempt to show the attacked group as the evil, sneaky, conspiratorial enemy.

If I were a wilier TV station executive, I would have aired it directly after an episode of Will & Grace, and seen how the audience would have taken it.

While disgusted that folks are pushing homophobia under a family-friendly banner, I am encouraged that the majority of folks are critical enough to smell a very rotten fish.

Im less apologetic than Fletch. The reason is context. The effeminate voice was used during our dramatic reading of passages from 1st and 2nd Samuel. The entire point of that skit was to be over the top (cliche make-out music, sensual narration, etc.) embarrassing the religious homophobe by reading the object of their fear into the scripture itself. Many times sterotypes ARE used as a comic convention, and are not always a sign of prejudice (ex. by Mr. Norris' standards one would have to condemn just about every gay comic/comedy out there). I took this to be so obvious that it really didnt need pointing out, which is why I made the "righteousness" comment. After listening to this show it should be pretty clear who's side were on and I think for our efforts we deserve better than to be accused of peddling stereotypes because a slight lisp was used in a comedic sketch.

The Lisp Question seems to reflect back to the very beginning of the episode, when the authors of After the Ball propose presenting a hyper-normalized image of queer culture (sans-lisp)? People in the queer community condemned this as misrepresentation while homophobes accuse them of presenting a false image to the public.

It seems to be a Damned if you do / Damned if you don't situation. In which case I think it makes more sense to look at what the show was critical and supportive of. Some people have lisps; some don't. Is that important relative to the ideas presented by the show?

I recently discovered your podcast. My first episode was Speechless and I was very impressed. I especially liked your treatment of 'the text' on the question of same sex relationships. My undergraduate degree at une.edu.au was in history and studies in religion. I find it rare that religious questions are treated with the fairness, thoroughness and rigour my professor attempted to drum into me. Looking forward to trawling through the archive.

Two of my gay friends died at early ages of AIDS contracted while engaged in the homosexual encounters.

That homosexuals are susceptible to diseases peculiar to that lifestyle is substantiated by both the medical community (SOURCE) and the gay movement's lobby for billions of dollars in AIDS research and prevention.

Stating the above will get you "jammed" by militant gay activists. You'll be labeled a homophobe and, if you have a public profile, will become their target of hate; to destroy your reputation.

Having been the victim of militant gay hate groups, I understand the validity of AFA's documentary. I've experienced gay hate. But I won't be silenced.

You won't be silenced and yet you are anonymous? Nice.

AIDS is not "peculiar" (I assume you meant "particular") to homosexuals. Yes, AIDS is and has been for decades, a huge problem in the homosexual community. No homosexual I know would dispute that. But AIDS is also a huge problem in Africa -- not because it's overrun with the gays, but because of poor sex education (and condom burning parties -- Thanks Catholic Church!).

The problem isn't homosexuality, it's stupidity.

Absolute trash. Does anyone else see the irony in this episode? "We censor movies in the name of free speech". This episode is a terrible, terrible tragedy. Poor form, guys.