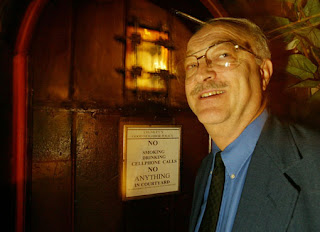 Visions, weeping statues, speaking in strange tongues…even in modern times believers have appealed to seemingly miraculous events as evidence for their supernatural beliefs. But is there any evidence that miracles really happen? Paranormal investigator Joe Nickell joins us on the show to discuss how to scientifically investigate claims of the miraculous. Also for a "God thinks like you" segment the doubtcasters discuss the psychological basis of supposedly supernatural phenomena such as glossolalia or "speaking in tongues"

I'll have to second "Dr. Dan", as I quit going to the local weekly Atheist/Skeptical meet-ups when the guy running it stated "if you're an ahteist, you must be a democrat"... REALLY?!

It wasn't just him, as the group was by-and-large a liberal/democrat cheering squad.

"the neo-cons and libertarians here. There’s too many and I can’t deal with arguing socio-economics any more this weekend"

I've been involved with CFI for over a year now and have noticed a much higher concentration of fiscal conservatives, even and especially amongst the higher-ups. This bugs me because I think skeptics (especially those who've had exposure to evolutionary psychology, behavioral economics, etc.) should be able to see that faith in the invisible hand is just that...faith.

But as much as this can bug me at times I think the diversity of political and economic viewpoints is really one of CFI's strengths. Especially because Anon is right in his charecterization of some atheist meet ups as "by-and-large...liberal cheering squads." I came to appreciate this quite a bit after attending an American Humanist Association conference in Florida. The liberal rhetoric was so thick that it made me feel uncomfortable. Id never seen so much group think amongst freethinkers before (and I say this as someone who is very liberal, even leftist at times). Two incidents stick out in my mind as examples. At one of the conferences, the speaker was discussing inconsistencies and contradictions in how pro-choice advocates argue for abortion rights. He was himself pro-choice and made it clear that he hoped the discussion would clarify and strengthen the pro-choice argument...but he was booed and verbally harassed by some in the crowd and faced a long line of angry people wanting to give him a piece of their minds after the lecture. Then at a Feminist Caucus meeting 3 men took issue with something the speaker said that was very postmodern and arguably anti-reason. I thought the gentlemen were constructive and polite in their counter-argument...but the backlash from the audience was so irate and full of personal attacks that the men felt uncomfortable and some left. I (the other man in the room) spoke up and defended their right to speak and be treated respectfully. The next audience member that responded to my comment wouldn't even look at me and instead turned to the audience and said "see what these men have done, there trying to hijack the conversation right now!" Surprisingly no one came to my defense. I was very disillusioned as I considered myself a feminist of sorts and never gave any credence to the "man-hating" anti-feminist stereotype. These and other incidents astonished me, and it seemed to me that the AHA (at least at this conference) had become little more than a leftist rally. Now to be fair, I have some whoppers I could share from my interactions with CFI also, but I've never seen anything at center meetings or conferences like those mentioned above.

I say this not to boast of the virtues of CFI over that of the AHA, but only to say that all secularist groups should realize that we too can become an echo chamber...and that its worth a little loss of political unity to have that diversity of viewpoint.
And more generally, no matter who you are or what you believe...a lot of us skeptics should learn to pull our heads out of our asses, leave our degrees at home, dial down the ego, and learn to have a polite conversation with others.

Now as far as our politics on the show...I think even though we speak our views plainly we've made an effort to be fair and accommodating. Most importantly we don't claim to speak for other freethinkers...these are only our view. But I'm open to this criticism, and if more conservative listeners speak up and point to specific instances where we pushed our politics to far, Id like to believe that we would have the integrity to admit our mistakes and be more careful. At the moment however, I think we've kept it pretty evenhanded.