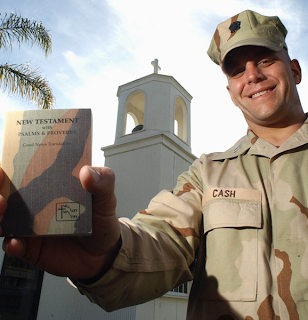 One of the most dangerous entanglements between Church and State is seldom witnessed by the average American civilian. Yet from the Air Force Academe to the Pentagon, the United States Armed Forces have been infiltrated by evangelical Christians who believe their purpose is to "raise up a Godly army." For this episode the doubtcasters examine this trend and its connection to Christian apocalypticism. This episode also features the comic short "This Humanists Army" as well as a counter-apologetic segment debunking the "70 Weeks" passage in the book of Daniel which is thought by many apologists to be one of the strongest examples of a fulfilled prophecy.

Great episode guys! I really think you've found that sweet spot of rational, interesting, thoughtful message but at the same time injecting a interesting sense of humor. Keep it up! I'd be really sad to see another atheist podcast bite the dust.

Another excellent podcast guys, I have a question about your shitlist; what was the name of that car dealership in California? Was it Keef and Sons, or Keith and Sons? Can you please put a link to their ad or post their email address on the website for the benefit of your listeners?

It's actually "Kieffe." Here's a link to a video of the radio commercial (yeah, I know).

And here's a transcript:
"Did you know that there are some people in this country who want no prayer in schools and want 'In God We Trust' to be taken off our money? But did you know that 86% of Americans say they believe in God? Now, since we all know that eighty-six out of every hundred of us are Christians who believe in God, we at Kieffe and Sons Ford wonder why we don't just tell the other 14% to sit down and shut up. I guess maybe I just offended 14% of the people who are listening to this message. Well, if that's the case, then I say 'That's tough.' This is America, folks. It's called 'free speech' and none of us at Kieffe and Sons Ford are afraid to speak up. Kieffe and Sons Ford on the Sierra Highway, Mojave, Rosamond. If we don't see you today, by the grace of God, we'll be here tomorrow."

All complaints should be directed to:

or via e-mail at:

During the podcast, a question was raised about the compatibility between Christian doctrine and martial zeal. Doctrine probably plays only a small role here. The real connection was almost brought out by the appropriate comparison between Amway and the military.

Having been raised in a more or less benign cult, I've observed that those who once belong to a cult seem predisposed to subsequently joining additional cult-like organizations. While I'm not claiming that the military is a cult, it does employ many methods of behavior control that are used by cults. I'm also not claiming that all Christianity is a cult, but the flavor of militant, proselytizing, truculent Christianity that seems to be associated with many members of the military also employs many methods shared by cults. We shouldn't be too surprised at the apparent cosegregation of the two.

I went on the Keiffe and Sons website, and they had this posted:


This statement is provided in response to reaction prompted by a radio commercial that Kieffe & Sons Ford recently ran referring to issues of God in our schools and on our money.

"For 15 years, Kieffe and Sons Ford has run ad campaigns that focus on current events. We have chosen to do this rather than presenting typical car sales ads. We do this through an agency that develops the material and sends us a package of commercials to review. From this, we select commercials that we distribute to area radio stations. Frequently we emphasize humor and patriotic themes, as we are located adjacent to two military bases. Public response over these 15 years has been hugely positive, often eliciting calls and visits from appreciative individuals. Regrettably, the commercial that has prompted the current objection to religious sentiment ("Under God", "In God We Trust") was not closely reviewed by our dealership before it went live. The commercial has been replaced. We apologize to all who were offended. It is Kieffe and Sons' intention to support America and the freedoms that make this country great."

"not closely reviewed by our dealership!?!" They make it sound like they are just airing prerecorded content. I wonder how "we at Kieffe and Sons" got into the message...must be a case of EVP.

Actually, the apology you list was forced by Ford. They have subsequently made statements saying that they do believe the sentiments in the original commercial.
http://tinyfrog.wordpress.com/2008/06/01/car-dealer-retracts-radio-ad-apology/

I enjoyed the podcast and I'm recommending it on my blog. I received the recording of the ad from Karen Peralta and posted the link on my blog. We were really surprised at the reaction. It was a very fun 3 weeks in May. I have several posts about the ad, Ford's reaction, and the notpology posted.

I was even contacted via email by a reporter. Unfortunately for her, I really did not want to give an interview. I heard that she showed up at our local freethinkers get together and caused some commotion. Luckily,I had other commitments and I also suspected she would show up there.